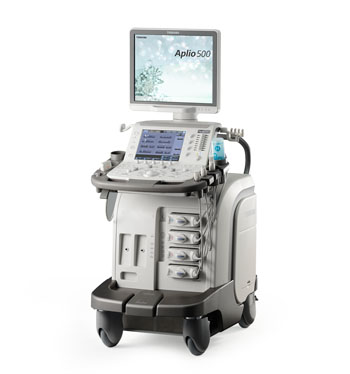 Researchers are using microvascular ultrasound imaging equipment to study the microvascularization of the placenta, the elasticity of placental tissue, and its calcification content.

The multisite study is part of an initiative to improve the understanding of the function of the placenta, and is being funded by a USD 2.725 million grant from the US National Institutes of Health (NIH).

The Aplio 500 Platinum system provides advanced visualization imaging, quantification and intervention, and will be used by EVMS for Superb Micro-Vascular Imaging (SMI) for noninvasive visualization of small blood vessels, and low-velocity microvascular blood flow. The researchers at EVMS will use Toshiba’s Shear Wave Elastography (SWE) for noninvasive measurements of tissue stiffness, and Toshiba’s MicroPure visualization of microcalcifications, instead of gray scale imaging.
The study is intended to help find new methods to predict, and minimize difficulties later in pregnancy, by studying the placenta during the early stages.

Dr. Alfred Abuhamad, Chairman of Obstetrics and Gynecology, and Vice Dean of Clinical Affairs, EVMS, said, “Through our research study, we hope to develop an algorithm that can potentially help predict late pregnancy complications in early gestation by using new, high-tech ultrasound software, provided by Toshiba. Our study is designed to identify which ultrasound tools are best at determining women who will develop poor pregnancy outcomes and those who will not. If we have the ability to identify which pregnancies will have complications in the future through ultrasound, then we can address it early with interventions and therapies.”